For years tattoos have been a fashion statement, but in future tattoos can me much more than that. Google owned Motorola Mobility has recently filed a patent in USPTO for an electronic neck tattoo that can serve as a lie detector. The tattoo can be pasted on the neck or worn on collar or on a band around the user’s neck. The patent application highlights that “the electronic skin tattoo can include a galvanic skin response detector to detect skin resistance of a user; it is contemplated that a user may be nervous or engaging in speaking falsehoods may exhibit different galvanic skin response than a more confident, truth telling individual.”

The tattoo can mainly serve as supplementary microphone and can be paired with various electronic devices such as smartphones, tablets etc.  This means that the user can easilycommunicate through mobile phone by a voice command without having to press any button. The tattoo can run on rechargeable batteries or can usesolar panel technology, capacitive technology, nanotechnology or electro-mechanical technology as explained in the patent application.

Picture: A drawing from patent application of Google’s neck tattoo by Motorola

The patent which is titled "Coupling an Electronic Skin Tattoo to a Mobile Communication Device” is primarily meant for nullifying the background noise when a caller speaks from a crowded surrounding. The tattoo worn on the neck can improve the voice quality by making the caller more audible to the person on the other end of the call through a noise-cancelling system.

Interestingly, the tattoo could also be worn by animals, although we are clueless as to how it could help an animal. But for now we are sure that this new wearable technology will make one think before lying.

Email ThisBlogThis!Share to TwitterShare to FacebookShare to Pinterest
Labels: Patents


In a recent turn of events, Gucci an Italian fashion and leather goods brand has opposed a UK trademark application for a device mark claiming it to be similar to their famous GG logo. But the registrar ruled that the said device mark lacks resemblance to the GG logo and the mark does not conflict Section 5(3) (of UK Trademark Act) for protectionof well-known marks. The applicant’s device mark was also applicable to similar goods such as clothing line etc. 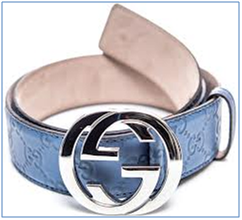 Gucci has registered its GG logo via Community Trade Mark registration in EU and UK. In UK it is a registered mark for over 50 years which was described as two G’s facing each other creating a symmetric mirror image. The basis of opposition by Gucci was based on this description. But the registrar disagreed on Gucci’s claim stating that the applicant’s device was more analogous to ‘human torso’. He also argued that the consumers will pay more attention to the device per se and the perception to the similarity of the marks will be little.

Although Gucci provided many evidences to prove its point, registrar stated that the Gucci has failed to prove that Gucci’s device mark has brought a significant distinction to their brand and products upon use. This led to Gucci’s unfortunate loss in the case.

So the question here is how much is too much? What amount of similarity between the device marks makes them similar and deceptive? Although, it is also important to note that Gucci has been changing its GG logo for the purpose of rebranding and advertising, so will a differently arranged  double ‘G’ applied for the similar kind goods create confusion among consumers as a rebranded Gucci’s logo? Perhaps this question can be best answered by the consumers themselves.